Green Chile In The Air, Vol. 3 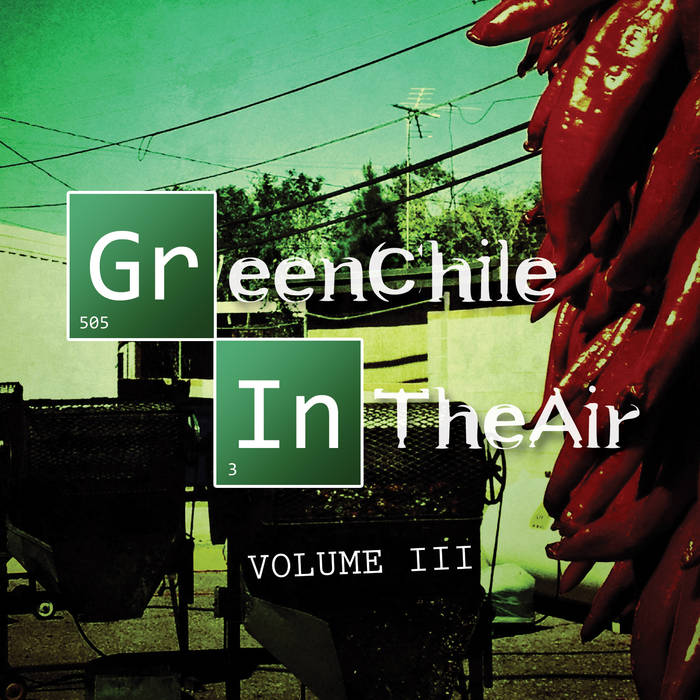 This is the third edition of the annual album GreenChileInTheAir by Albuquerque producer Diles, with Visceral View Entertainment and Central Root Studios (Central Root Music Group, LLC). Volume two featured artists from around the Southwest, Midwest, and West coast regions highlighted by artists such as Anacron, Idris Goodwin, Carlos Contreras and Kevin Coval. This year’s batch ended up connecting with artists on a global scale. GreenChileInTheAir Vol.3 features artists from Vancouver, Los Angeles, Denver, Colorado Springs, Trinidad and Tobago, Gabon, and of course Albuquerque. Featuring the likes of artists such as modern renaissance artist Anacron, The prolific underground Hip-Hop legend Moka Only, critically acclaimed poet, author, MC, and playwright Idris Goodwin, Albuquerque Poet Laureate Hakim Bellamy, Bianca Mikahn, Kayohes, Jungle One and many more.
Diles compiled 90% of the songs between August and October 2013 during “Chile Season”. Most of the songs were recorded at Central Root Studios in Albuquerque, NM. It is an eclectic mix of modern Hip Hop while still staying true to Diles’ notorious blend of nostalgic golden age vibe and dark traditional boom bap styles. The wide array of artists, locations in which they reside, and cultures they represent, along with the mix of Spanish, French, and English languages add to the underlying emphasis that Hip Hop can unite people and offer a common “language” to all. It is also fitting due to Albuquerque being such an ethnic melting pot and international destination, as well as our recent global recognition from Hit T.V. show Breaking Bad (Which is also a theme for the artwork on GCITA3).
Much more music to come soon from Diles, albums with artists Bianca Mikahn (“Nightdreams and Daymares” due to release Nov 16, 2013), Kayohes (“Zia Sun 16 Bars” due to release early 2014), Hakim Be, Asliani, and Jungle One are already in motion and several nearly finished and due for release in near future. Diles also has several instrumental albums in the works and expected for release in early 2014 including “Adobe Starship Volume 2.”

Produced, recorded, and mixed By Diles.
Mastered By DJ Icewater